The Most Watched YouTube Videos and How Much Revenue They Generated 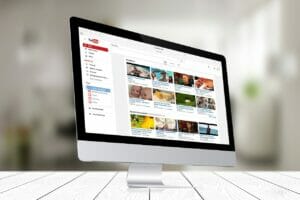 Created in 2005, YouTube has become the world’s most popular video streaming service. With 2.5 billion users each month, it has become a lucrative source of revenue for many content creators on the platform.

The site’s evolution has led to it becoming a full-time source of income for many creators. YouTube allows creators to monetise their content by displaying ads on their videos.

As a result, the platform has the most favourable Cost Per Click (CPC) and Cost Per Mille (CPM) than any other social media platform. This is why thousands of creators have fled to YouTube as their platform of choice to upload their work.

The most viewed YouTube video created a revenue of $22 million, purely from views on the video and clicks on the ads. This has led BonusInsider to search for just how much money can be made off YouTube and what type of content attracts the most views on the platform.

So, our team looked into the top 10 most watched YouTube videos and how much revenue they have made as of November 20th 2022. 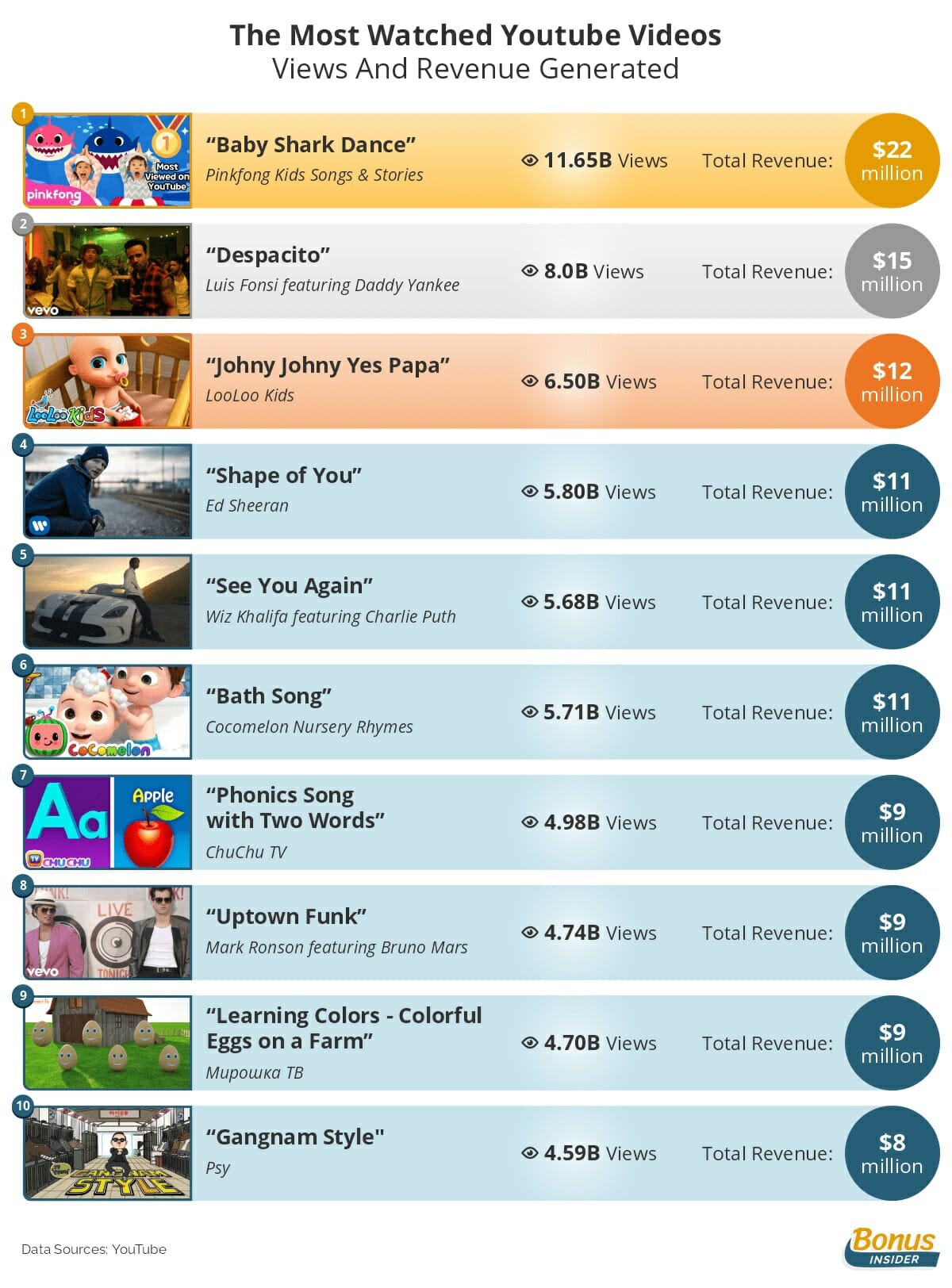 There are a few ways in which YouTube calculates the revenue from each video. The money paid to creators comes from the ads displayed on a video. The revenue of a YouTube video is calculated per every 1,000 views – this is CPM.

Or, per CPC, which is how much the advertiser pays for every click on the ad. Therefore, we have calculated the revenue per view by combining the CPM and CPC to reach an estimated amount.

The average CPM is $7.60. We have calculated the revenue from each video using the influencer marketing hubs YouTube money calculator.

Google takes a 45% share of YouTube advertising revenue. Therefore the content creator gets 55% of every dollar paid by advertisers. When Google takes its 45% from the average CPM of $7.60, creators get $4.18.

It is also important to note that it depends on what kind of ads creators have chosen to run on their videos.

For example, video ads (played before the user’s video starts playing) are more profitable than banner ads (shown at the bottom of the screen whilst the video is playing). Therefore, please bear in mind when looking at the data that the revenue calculated is just an estimate.

Baby Shark was the first video on YouTube to reach over 10Bn views, which still stands today. Created in 2016, Baby Shark started to gain popularity in 2017. However, it took four years for the video to overtake Despacito, which was the most-viewed video up to that point.

Nevertheless, the 2-minute clip gained so much popularity that it spurred a viral online dance trend. It is estimated that the video made $22m just from views alone.

Released in 2017, Despacito quickly rose to the most-viewed YouTube video of all time. Soon overtaken by Baby Shark, Despacito has since then held second place with 8Bn views. Still, it took YouTube by storm and topped the charts in 47 countries and made it to the top 10 in another 6.

So much so, that music legend Justin Bieber made a remix version just three months later. It is estimated that the video made $15m on YouTube.

Third on the ranking, reaching a revenue of $12M, is an English nursery rhyme. The video uploaded to YouTube in 2016 is about a child, Johny, who gets caught eating sugar by his father.

It rose in popularity when posted by a kid’s YouTube channel called LooLoo kids. Previously it was thought that the video had been around since 2007.

Chart-topping song, Shape Of You, by British icon Ed Sheeran is estimated to have made $11m on YouTube. Number 1 in 34 countries, the song won the Grammy for Best Pop Solo Performance in the 60th Grammy Award show.

So, it is obvious why this worldwide hit reached such an impressive amount of views on Youtube.

The pop hit by Wiz Khalifa featuring Charlie Puth was uploaded to YouTube in 2015. It quickly became both artists’ biggest single to date.

See You Again held the top spot in 2017 for most viewed videos on YouTube before it was overtaken. Since then, it reached an estimated revenue of $11M.

Close behind, the bath song was released in 2018. The children’s nursery rhyme is about bath time and aims to help children become more comfortable with taking a bath. Again, creating revenue of $11M, the video gained popularity in the parent community to encourage kids to take a bath.

Another nursery rhyme gained popularity in 2014. Impressively, the Phonics Song was uploaded over eight years ago and is still gaining attraction today. Profiting from $9M in revenue, the video has done well to uphold the 7th position.

Uptown Funk was directed by Mark Ronson and featured the famous American singer Bruno Mars. Heavily influenced by the early 1980s, it led to a number of lawsuits over copyright issues. It is speculated that the controversy surrounding the rights of the song led to an increase in the views of its YouTube video, resulting in an estimated revenue of $9M.

The Russian nursery rhyme released in 2018 quickly became popular. Many viewers didn’t understand how it could be one of the most viewed videos, claiming that there is barely anything in it content-wise. It is thought that this controversy helped the video gain 4.7Bn views and $9M in revenue.

The South Korean K-pop singer Psy released the iconic song Gangnam style in 2012, making it the oldest video in the top 10. Impressively, a video that is ten years old is still one of the most viewed on YouTube to this day.

Moreover, the catchy song came with a dance that went viral worldwide, helping it secure billions of views and $8M in revenue.

The common denominator of the videos in the top 10 is that they are all music videos. This suggests that music videos do better on YouTube than videos where creators talk – tutorials, product reviews, etc.

After looking at the songs in the top 10, it is clear that many of their views come from repetition. The songs are likely to be played numerous times, helping them reach the extremely high numbers we see.

Overall, the combined revenue made from the top 10 view videos was $117M. YouTube has opened a new stream of revenue for creators, which is now being replicated on platforms such as TikTok and Instagram.