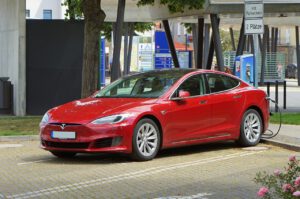 Data from the China Passenger Car Association reveals that Tesla Inc (NASDAQ:TSLA) started to recover from its April slump in sales. The automaker sold 33,463 cars in China last month, a 29% increase from the 25,845 vehicles it sold in April.

Although Tesla did manage to beat April's sales number in China, it came up short of March's result. It sold 35,478 cars in China in March. Exports from Tesla's Shanghai factory also declined month over month.

The automaker's sales rebounds came despite negative headlines and scrutiny by Chinese regulators over reports of failing breaks by customers. Additionally, Tesla faces pressure with the rest of the auto industry due to a shortage of computer chips.

Last month, the automaker shipped 11,527 cars from its factory in China, which is less than the 14,174 vehicles it shipped in April. Total sales of all-electric vehicles in China more than doubled from last year, jumping 186% to 162,000 last month. However, CNBC notes that some have expressed skepticism about the China Passenger Car Association's numbers.

In other Tesla news, MarketWatch reports that an exchange-traded fund driven by artificial intelligence dumped the automaker this month and loaded up on GameStop Corp. (NYSE:GME), Qualcomm, Inc. (NASDAQ:QCOM) and Snap Inc (NYSE:SNAP).

Tesla and Amazon Inc (NASDAQ:AMZN) and had been two of the Qraft AI-Enhanced U.S. Large Cap Momentum ETF (NYSEARCA:AMOM)'s three largest positions. However, the ETF exited those positions completely along with NVIDIA Corporation (NASDAQ:NVDA), which had been its sixth-largest position. The AI that drives the Qraft fund expects those stocks to decline in the coming month.

The addition of GameStop raised a few eyebrows, as it's basically the poster child for meme stocks. Qraft Managing Director Geeseok Oh told MarketWatch that "few fund managers would take the risk of adding a meme stock to their portfolios." However, the artificial intelligence that drives the ETF doesn't have any such prejudices.

The post Tesla Started To Bounce Back From Its April Sales Slump In China appeared first on ValueWalk.