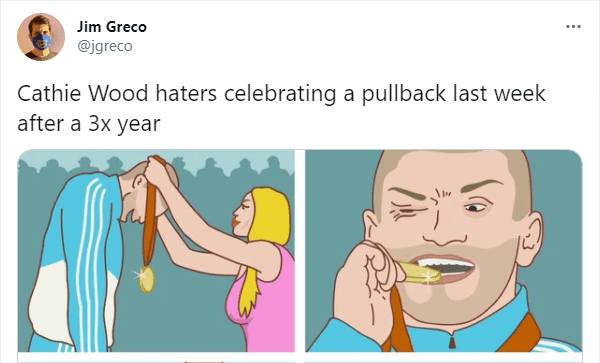 In today’s equity update we are following up on our analysis of the Tesla-Bitcoin-Ark risk cluster showing an updated positions analysis, cross-correlations in the flagship Ark Innovation ETF, and an drawdown analysis. Yesterday, was another bad session for this risk cluster and Ark Invest had a day with outflows across all their ETFs highlighting that risk sentiment has changed. With the founder’s bold move to increase the position in Tesla during the week the risk has gone up that this risk cluster could turn into an ugly forced selling dynamic causing pain in not only Tesla, Bitcoin, and Ark funds, but also US biotechnology stocks where Ark Invest is a major holder with high ownership in selected names.

Garnry’s not the only analyst who’s warned about this risk. Kris Sidial has too, but Lilly Francus offered a contrarian take on it. More on them below, but first a quick note on Cathie Wood.

The Passion Of The Portfolio Manager

As she told the Jesus Calling podcast last month, Wood named her ETF after the Ark of the Covenant:

Well, I started ARK Invest at the age of fifty-seven, so it was quite late in my career. I believe my career is starting all over again, though. I decided to name my company after the Ark of the Covenant, because as I was going through that very difficult period starting in ‘06, where the market, nothing made sense to me, I started reading the One-Year Bible, after I would read the passage for the day, I would then just open it up randomly and say, “God, speak to me. Just show me what to do. Show me Your will. Show me Your way.”

We went on to note that following in the steps of an evangelist can be a rocky road.

Now, on to Kris Sidial and Lilly Francus and their takes on the Tesla-Bitcoin-Ark risk cluster.

The Correlation Works Both Ways 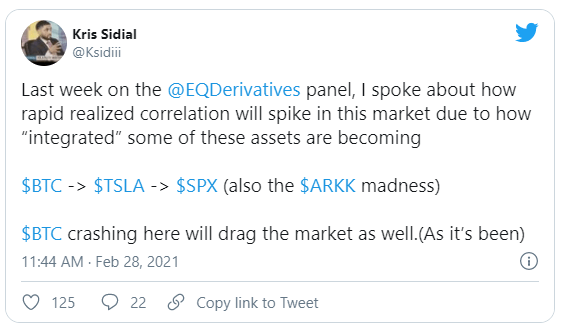 In a follow up, he linked to an earlier tweet of his warning that the correlation between those assets could “rip a lot of faces off”: 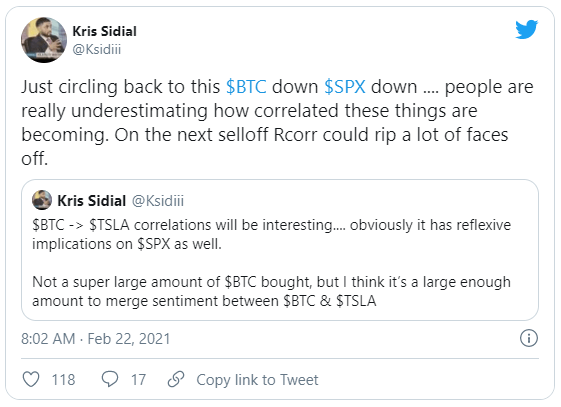 In the thread above, Francus sketched out how Tesla’s inclusion in the S&P 500 has buoyed Tesla, which in turn has kept the Ark ETF afloat. Because of that, Francus argues it’s unlikely that Ark will sink absent a broader market downturn. 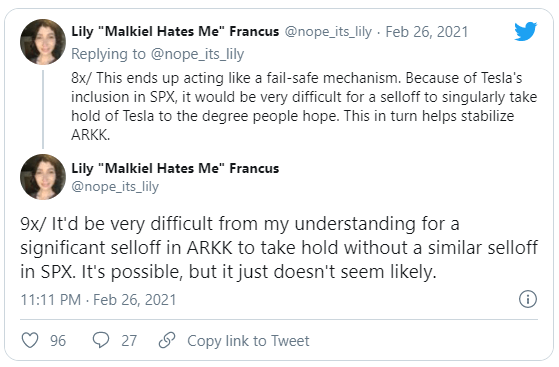 Whether you lean toward Garnry’s bearish take on the Bitcoin-Tesla-Ark complex or Francus’s more bullish one, both illustrate the folly of relying on diversification to limit risk.

The Folly Of Diversification

In a market downturn correlations converge toward one. We saw a small taste of that last week, as the Bitcoin-Tesla-Ark complex and the broader market dipped. If most stocks – and even other assets, like crypto – are going to drop at the same time, diversifying among them doesn’t do much to reduce your risk. What it can do, instead, is water down your returns. Instead of having your money concentrated in your best ideas, you have it spread thinly among scores or hundreds of different names.

We use a different approach: buy and hedge a handful of names that

Conveniently enough, Tesla was one of those names six months ago, so we can show how are approach to it worked out since.

Like Cathie Wood, we’ve been bullish Tesla for a while. It was one of our top names six months ago, so it appeared in a number of our hedged portfolios then, including this one. This is the portfolio our system created on August 27th of last year for investors who indicated they had $3,000,000 to invest and were willing to risk a drawdown of 25% over the next six months, but not one larger than that. You can use our system to create portfolios as small as $30,000 with maximum drawdowns of as little as 2%, but Tesla wouldn’t have appeared in one of those. 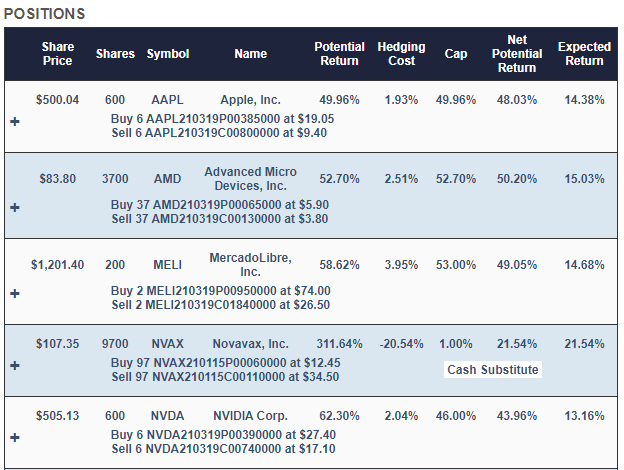 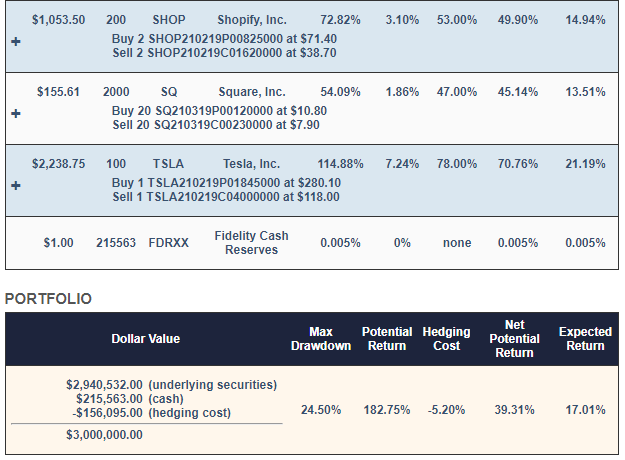 The worst case scenario for that portfolio was a drawdown of 24.5%, and the expected return was a gain of 17.01%.

Apple (AAPL), AMD (AMD), MercadoLibre (MELI), Nvidia (NVDA), Shopify (SHOP), Square (SQ), and TSLA were selected because they were among our top names – the ones that had the highest potential returns, net of hedging costs – when hedging against a >25% decline on August 27th. Our system started with roughly equal dollar amounts of each, and then rounded them down to round lots, to reduce hedging costs. It swept up most of the leftover cash from the rounding-down process into a tightly collared position in Novovax (NVAX) to further reduce hedging cost.

On our website, if you click the plus signs in the portfolio above, the positions expand to give you a better look at the hedges. For example, this is what the Tesla position looked like expanded.

As you can see, TSLA was hedged with an optimal collar (Tesla’s share price was over $2,200 there, because this portfolio was created before its 5-for-1 split on 8/31/2020.). In this portfolio, all the positions were hedged with optimal collars. Our system estimates returns hedging with both optimal collars and optimal puts to determine which type of hedge is best. We elaborated on that process in a recent post: When To Hedge With Puts Versus Collars.

Here’s how that hedged portfolio did over the next six months. 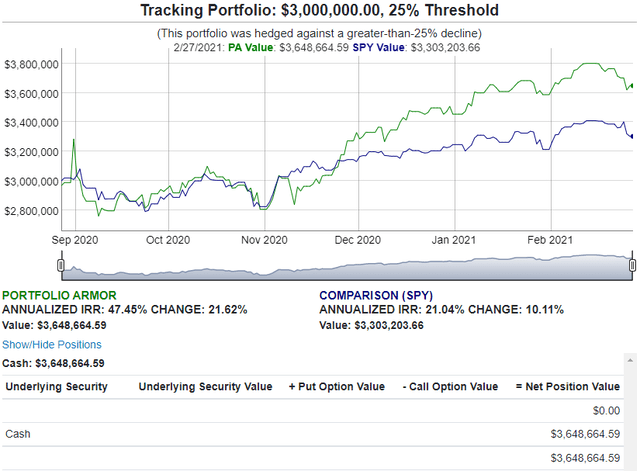 Our hedged portfolio including Tesla and those other tech names ended up 21.62%, net of hedging and trading costs. SPY was up 10.11% over the same time frame. You can find an interactive version of that chart here.