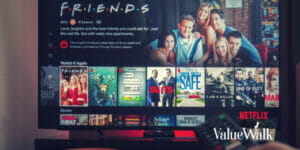 Netflix Inc (NASDAQ:NFLX)’s fourth quarter revenue rose to $7.9bn, which was slightly better than expected and was up 10%, ignoring the effect of exchange rates. Growth was driven by a 4% increase in average paid memberships, to 230.8m. The group added 7.7m subscribers in the quarter, which was much higher than the 4.5m forecast.

This reflected both “strong” acquisition of new members and retention of existing customers thanks to popular content in the quarter. Average revenue per membership (ARM) rose 5% on a currency neutral basis.

Netflix launched its lower-priced ad-supported subscription in November and is “pleased” with results so far.

Reported operating profit of $550m was over $200m better than expected, reflecting the better revenue and slower-than-expected hiring. Underlying operating margins were 20%, at the top end of the guidance range.

Netflix spent $4bn on content in the quarter, down from $5.7bn at the same time last year. Free cash flow was $300m in the period, with full year free cash flow higher than forecast.

The group expects fewer new subscribers in the current quarter, but is predicting revenue growth of 8%, ignoring exchange rates.

“Netflix has had a showstopping end to the year, in a performance even its worst critics can’t argue with. While Wall Street sags with the weight of recession fear and Federal Reserve jitters, Netflix’s huge beat on subscriber numbers has injected some much-needed optimism into the mix.

The subscriber growth has come from a combination of acquisition and retention, which is incredibly important. Netflix has had to pedal very hard just to stand still in recent times, which is a worrying state of affairs. Now that the top of the subscriber-funnel is flowing once more, it paves the way for longer-term growth.

A strong slate of content has made this possible, including the much talked-about Harry and Meghan documentary and Wednesday. While these wins can’t be knocked, such high profile launches are rare, and we’re likely to see some content stagnation in the coming quarter which will slow the pace of customer acquisitions.

It’s important to note that one reason profits were much better than expected is because Netflix has reduced the pace of hiring. Tech layoffs are rife and further cuts at Netflix can’t be ruled out. That’s especially true when the competitive landscape is considered. The group’s grappling with enormous demands on our attention, including gaming, TikTok and YouTube.

When the entire ocean of available content is added together, Netflix is just a drop in the bucket. Some call that opportunity, but the reality is it’s a mammoth task for the group not to be taken under by more nimble competitors.

There’s not much to argue with on the financial front, with free cash flow, which has been a thorn in Netflix’s side, flowing freely. The recent attention on Netflix’s $300,000 job advert for a private jet flight attendant risks hitting a bum note with today’s younger investors, who are highly engaged in issues of governance though.

Being brash in the land of tech isn’t a new phenomenon, but at a time when Netflix is doing all it can to keep hold of market share, this is the sort of PR blunder it could do without.”