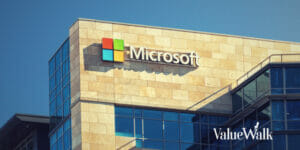 Microsoft Corp (NASDAQ:MSFT)’s revenue rose 2% on a reported basis to $52.7bn in the second quarter, which was lower than the 2.4% growth the market was expecting. Growth was driven by double digit constant currency growth in Productivity and Business Processes, which includes Office 365 and LinkedIn, and Intelligent Cloud, where Azure rose more than expected.

Underlying operating profit was flat when ignoring exchange rates, coming in at $21.6bn. This doesn’t include a $1.2bn charge associated with the group’s restructuring plans, including severance packages and lease cancellations.

Microsoft returned $9.7bn to shareholders through share repurchases and dividends in the second quarter, down 11% compared to the same time last year.

The shares rose 4.2% in after-hours trading.

“Microsoft’s enjoying the benefits of the US market rally. The market has rewarded the tech giant for its beat on Cloud revenues, as corporations continue to flock to Microsoft to unlock long-term efficiencies and cost savings.

It’s important to note though that the rate of Azure’s growth is slower than it used to be – which is one reason why Microsoft’s new-year rally hasn’t packed as much as a punch compared to some tech peers.

The group’s overall revenue growth is a long way off the double-digit strides markets had become accustomed to. Microsoft is dealing with a marked slowdown in personal computing revenues, which reflects the incredibly challenging consumer environment.

Despite renewed hope that interest rate hikes might be slowed and peak inflation coming into view, buying a new laptop and the software that comes with it is simply not a priority for many people right now. News of sweeping job cuts is front of mind, with a $1.2bn hit to profits coming down the line, which serves as a stark reminder of the challenges Microsoft is facing on a macro-level.

Severance packages and scrapping office leases are both incredibly expensive undertakings, but Microsoft clearly sees these as necessary evils as it battens down the hatches.

Looking to the long-term, Microsoft has an incredible product. The ChatGPT deal could also be a game changer for Microsoft, as it gives the group a serious edge on competitors including Google.

The AI industry is still in its junior stages so the market will need some convincing that this will meaningfully move the dial. For now, Microsoft’s paying attention to keeping its house in order first, and pulling the many growth levers at its disposal are a close second.”