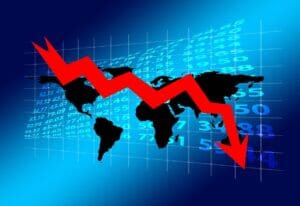 The latest Federal Reserve meeting minutes suggest that the U.S. economy is headed for recession as the central bank will remain aggressive in raising rates to cool inflation, warns the CEO of one of the world’s largest independent financial advisory, asset management and fintech organizations.

The warning comes from deVere Group’s Nigel Green as the meeting minutes released Wednesday signal that the U.S. central bank remains cautious on inflation, with officials agreeing that “rate cuts shouldn’t happen in 2023.”

The U.S. Economy Is Headed For Recession

He says: “Investors have been waiting with bated breath as the Federal Open Market Committee (FOMC) minutes from the December meeting released on Wednesday give us more insight into what factors the Committee has been using for future policy decisions.

“It appears that officials remain hawkish and are especially concerned about the tight labor market.

“We expect that the latest minutes will give the central bank further support to maintain interest rates higher for longer than had been previously priced-in by the markets.

“With the labor market not cooling as fast, there seems to be a considerable turnaround in tone from the more dovish minutes in November.”

He continues: “These minutes dash yet more hopes for an economic soft landing.

“Investors are increasingly concerned that the Federal Reserve could now overtighten and will steer the U.S. economy into a major recession.

“Of course, the central bank will argue it needs to continue with rate rises to bring inflation back to target.

“But it must also ensure that the tight labor market doesn’t overshadow the broader picture and continue to overdo the hikes, which would make a U.S. recession deeper and longer.

“As the world’s largest economy, this would clearly have a serious, negative impact on the global economy.”

Nigel Green concludes: “The tone of the minutes indicate the Fed is not yet ready to pivot as the central bank believes risks for inflation remain to the upside and they will keep tightening until more substantial progress is made on bringing it back closer to target.

“Inflation remains their primary concern, not risks to economic growth.”

deVere Group is one of the world’s largest independent advisors of specialist global financial solutions to international, local mass affluent, and high-net-worth clients. It has a network of more than 70 offices across the world, over 80,000 clients and $12bn under advisement.