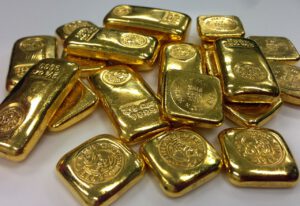 Livermore Strategic Opportunities Fund update for the month of April 2021, and their letter to AEX Gold (CVE:AEX).

Markets continue to trade in the clouds as we began earnings season. Although we have begun to notice a shift in tone from many companies. One in which costs are starting to take a bite out of margins and thus profitability. Additionally, President Biden has now floated the idea of paying for his massive trillion-dollar stimulus with an increased capital gains tax targeting the wealthy. So, with that, and much of the easy money gone, we foresee a tougher road ahead for most equities (case in point MSFT earnings which were blow out, yet the stock suffered).

Yet, very specialized value opportunities continue to look inviting, especially our niche of small cap commodity producers within energy, gold, and copper. We are heavily invested in the sector and view it as a strong hedge against inflation as well as solid value in an otherwise "bubbly" equity and bond market.

On portfolio specifics, our Jadestone Energy (LON:JSE) recently reported solid numbers a week ago although without new deals, the stock sits idle waiting for a catalyst. ‎We suspect that may occur sometime in H2 as management seeks opportunities that fit well within the company's stringent acquisition guidelines. Until then, the stock looks undervalued and rangebound but will continue to drive strong operating cash flows north of $200mm with a now debt free balance sheet, $80mm of net cash, and only 1.3X EBITDA.  Still one to watch.

On gold stocks, we own a handful of players include Sibanye Stillwater (NYSE:SBSW) which has had a strong run. The company is a gold and Platinum Metals Group (NYSEAMERICAN:PLG) operator and has the potential to help consolidate the sector. Copper is our favorite commodity play and we had identified companies that should greatly benefit as prices remain on fire. More to come on specifics later this year.

Additionally, we own a 6.4 percent stake in small cap exploration company AEX Gold (CVE:AEX) which ended up delaying their Nalanaq gold project due to Covid 19. Given the missteps and higher costs now associated, Livermore has engaged and is looking to gain seats on the company's Board‎ (see letter below). This will be Livermore's eighth activist process as we help steer the ship back into safer waters and help to determine the best path to develop the mine and surrounding licenses in Greenland. The opportunity set here is massive, given so many are focused on capturing rare earth metals and in which Greenland is plentiful. The hidden value proposition within AEX creates a much stronger narrative than a one mine brownfield development play. Additionally, the company is cashed up with no debt so as you prove up the resource, the stock can rerate in a very big way.

‎So, to put in context, the overall view of the market today suggests great froth in equities. The challenge then is not to get sucked in. Deviating from one's discipline is perhaps the greatest mistake one can make. Therefore, our focus must remain vigilant and yet look for ways to accelerate value enhancement opportunities within the portfolio.

I'll provide more ‎feedback as it comes through...

Until then, all my best,

Attention: Graham Stewart, Chairman of the Board

Livermore believes that AEX’s Nalunaq project represents a compelling opportunity to develop highly prospective assets and generate superior shareholder returns.  As a result, Livermore reviewed AEX’s February 10, 2021 announcement of cost overruns at and corresponding delays of the Nalunaq project with interest.   AEX had, to that point, created the perception that the Nalunaq project was a relatively mature asset, the recommissioning of which would not require substantial capital.  As recently as December 8, AEX claimed that the “Nalunaq Property has significant pre-existing infrastructure and development in place, left by previous operators, allowing the Corporation to establish near-term production at relatively low cost” [AIF pg. 9] and similarly that the Nalunaq project “benefits from a substantial capital expenditure programme conducted by previous operators on development and infrastructure, allowing the Corporation to resume operations at a fraction of the cost and time of a greenfield asset” [AIF pg. 10].

And yet two months later, the Nalunuq mine is now over budget and AEX has deferred the decision to proceed with development.  In our view the events giving rise to the February 10, 2021 press release were entirely foreseeable.  A prudent developer of this asset would have finalized matters such as secondary recovery processes and conducted external consultant reviews of the mine prior to communicating a development timeframe and raising capital.  Now, AEX has lost investor confidence.

We still believe in AEX and Nulanuq.  However, we are deeply concerned that AEX does not have the appropriate board of directors in place to steward AEX through this critical time.  In order to realize its potential, AEX requires board representatives with significant expertise in the development of mining projects and capital markets.

As a result, we propose that myself, Mr. David Neuhauser, and Ms. Patrice Merrin, both of whom are known to you, be added to AEX’s board of directors promptly.  We possess skills and experience that would be of immense value to AEX.  Please find enclosed with this letter curriculum vitae for both Mr. Neuhauser and Ms. Merrin.

As should be evident upon review of the CVs, Mr. Merrin and I would provide immediate bench strength and credibility to AEX’s board.  In particular:

We collectively offer a compelling addition to AEX’s board.

I look forward to discussing this with you at your earliest opportunity.