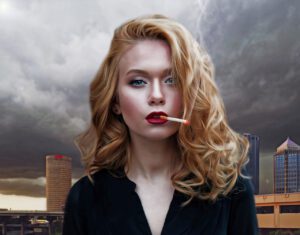 Reddit legend that started the ‘meme stock’ frenzy over the last few months, Keith Gill, best known as his screen name deepfuckingvalue just revealed he sold out of his GameStop position. This came as a shock to many Reddit users who saw him as a pioneer of a movement to stick it to the big hedge funds on Wall St. Gill revealed he sold 100% of his shares to buy menthol cigarettes in bulk pending a rumored Biden ban on flavored cigarettes.

In a Reddit post Gill stated, “While I still love GameStop and believe they are grossly undervalued, this is a deep value play I cannot pass up on. What President Biden is doing is so unamerican I had to slam a beer and watch World War 2 documentaries to get back into spirit. However, this will present me with a massive opportunity, once the ban hits I anticipate nicotine fiends will clean out whatever is left in roughly 6-8 months, this will be when I drag my massive nuts and stash of Newports across there face and resell these packs for $20 a pop, roughly a 135% profit margin per pack. Being a millionaire is great but once you reach millionaire status you cannot stop, I will be looking to get my networth to roughly 40 million dollars and at which point evaluate where GameStop is at and see if I may or may not re join the movement.

While many Reddit users thanked him for all he has done to bring them wealth, many were upset, one user stating “What the fuck bro? I saved up 3 months of paychecks to put them all into GameStop, if I have to work one more shift at Wendy’s I might actually blow my fucking head off.”

It is unclear how many menthol cigarettes Gill currently has, but Goldman Sachs has stated 'They are looking into opening a similar position and going long menthol cigs to be sold on the black market'

This article first appeared on The Stonk Market