Jerome Powell’s Running Of The Bulls 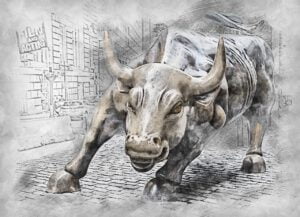 For weekend reading, while commenting on the stock market bulls, Louis Navellier offers the following commentary:

Central banks have a countercyclical role. That’s their job description. Pushing interest rates up or down affects the economy, which is how they have managed to iron out the wide swings in volatility of GDP growth that existed before the creation of the Federal Reserve in 1913. In the old days, helping the economy helped the stock market and the bond market, particularly the risky bonds.

However, in the brave new world of quantitative easing that started in the U.S. under Fed Chairman Ben Bernanke in 2008, the Fed began to manipulate both stocks and bonds in order to help the economy.

The Fed Is Directing The Stock Market Bulls

QE is like relying on stock fundamentals in reverse. QE pushes the stock market higher, which is one degree removed from direct stock market manipulation. Extreme levels of quantitative easing, like the one we just had under Chairman Jerome Powell to the tune of $120 billion per month, suppress Treasury and mortgage bond yields, chasing institutional investors towards riskier bonds, which in turn suppresses credit spreads. Shrinking credit spreads are then used (by many institutional investors) as a green light to buy more stocks, so while the Fed is not directly buying stocks –like the Bank of Japan – it acts much like a skilled matador, who directs the stock market bulls wherever he wants them to go.

The Federal Reserve directly controls the monetary base (which includes excess reserves created by QE), the narrowest form of money supply. This is electronic money for financial institutions only. 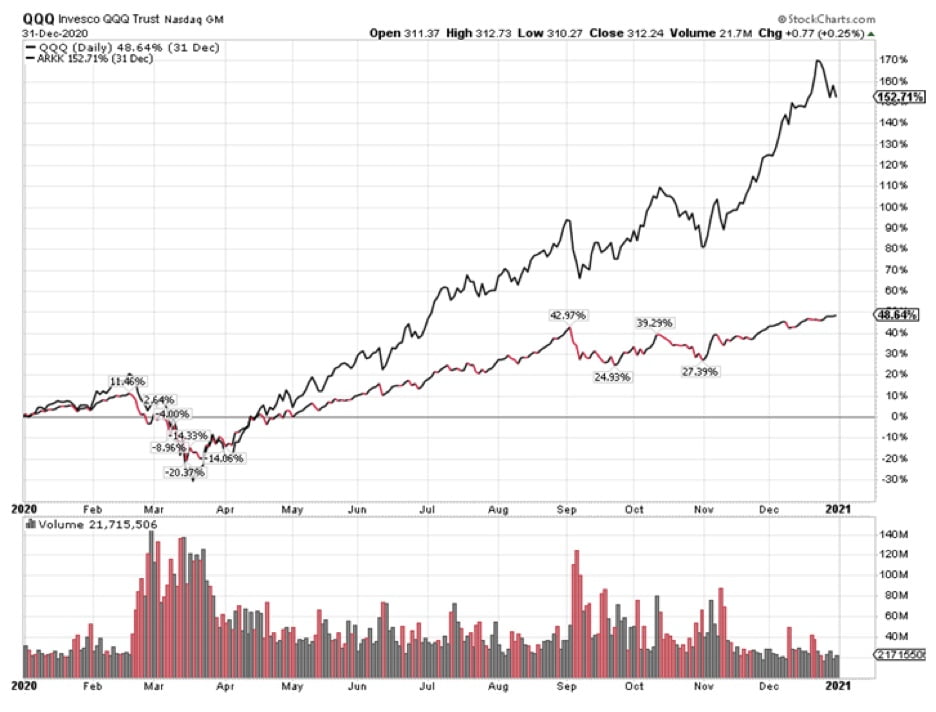 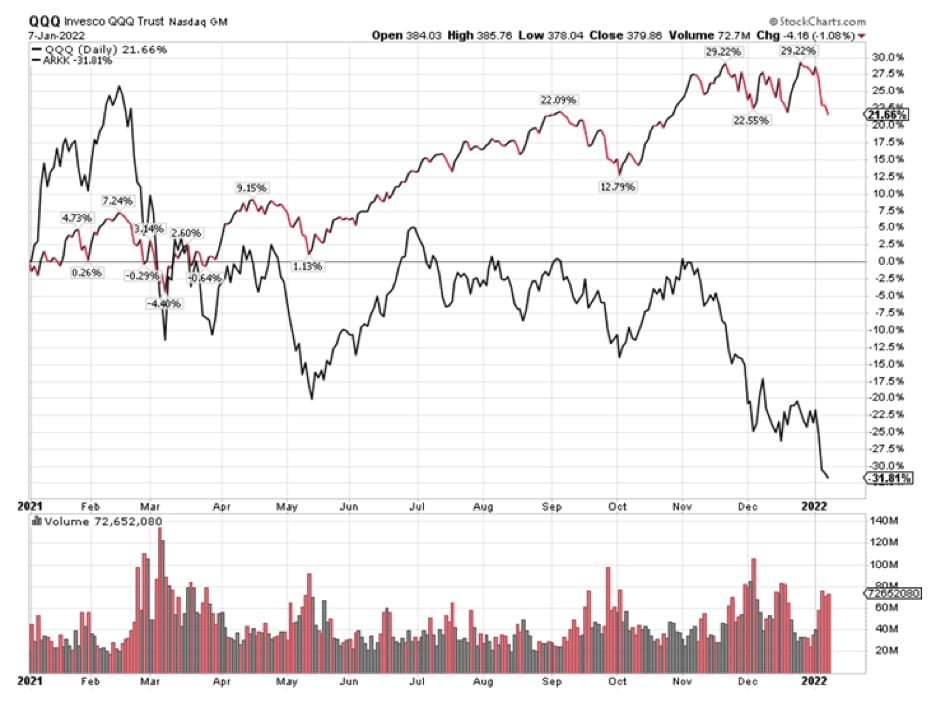 I am mentioning the Ark Innovation Fund, as I have received several questions from clients, which suggest to me that way too many investors have bought ARKK. One client that lives in California told me that ARKK was one of the top holdings for tech people that work in Silicon Valley. The problem here is not that Cathie Wood is not buying viable businesses with a future (many do), but that the extreme price-to-sales multiples for her holdings (some lacking P/Es, as they have no earnings yet) are shrinking. This is what happens when Jerome Powell and the bond market reverse the factors that pushed ARKK – and valuations for the whole market – higher in 2020. 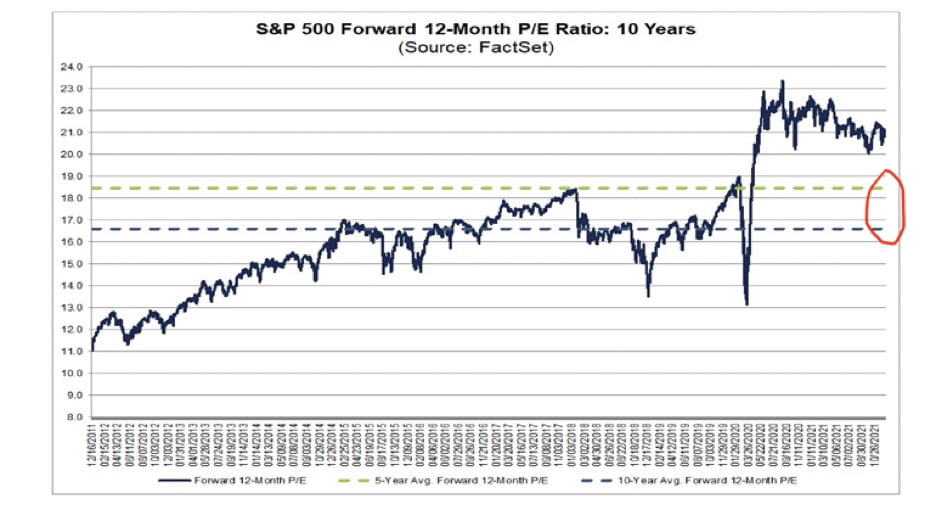 I think tech stocks, in general, will be fine in 2020, as long as they have reasonable valuations, but I think ARKK will dramatically underperform the overall tech sector in 2022, similar to the way it did in 2021. I would not be surprised if we see a second year in which the Nasdaq 100 rises while ARKK ends down.

A "Head and Shoulders Top" is Developing in Bitcoin

In addition to what looked like a pretty ominous double top in bitcoin in November (see Marketmail “11-23-21: Could This Be a Double Top in Bitcoin?”), we now have a head and shoulders top developing.

Some things you just can’t make up. 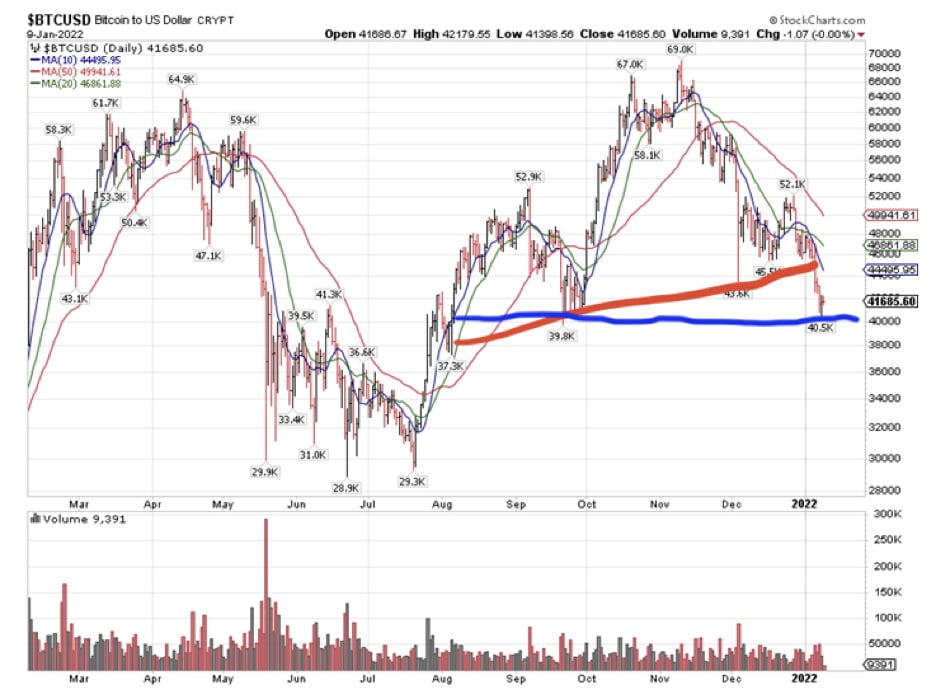 One could say that the head and shoulders top has already broken (red neckline), or that it is just about to break (blue neckline). Pick your own neckline color, but the interesting part is that both necklines, when violated, point to a target of $10,000, since the tip of the “head” is $69,000 and the neckline is $40,000-ish, and head-and-shoulders top declines tend to decline the difference between the head and the neckline.

You’ve probably seen the ubiquitous Matt Damon commercials for cryptocurrencies on CNBC. He invokes the name of the Roman goddess of luck, Fortuna,* but his ads do not appear to be helping cryptos in general at the moment. Fortune may indeed “favor the brave,” as he assures us, but in this case, perhaps the brave need to be brave enough to cut their losses, since I think more crypto declines are coming.

Bitcoin trades like a high-beta asset and has a decent correlation of late with ARKK, which is acting even worse. I believe, if key levels like $40,000 and then $28,000 are violated, selling in bitcoin will likely accelerate.