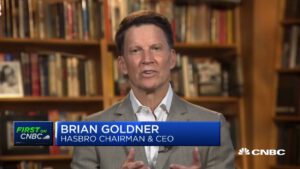 Brian Goldner, responsible for the successful growth and transformation of Hasbro Inc (NASDAQ:HAS) has died aged 58. Goldner was regarded as a driving force during his tenure at the company, making it grow from a toy manufacturer to an entertainment monster.

According to USA TODAY, the Tuesday announcement took place days after Goldner had taken a medical leave of absence. The company did not reveal the cause of his death, but in August last year, Goldner himself revealed he had been undergoing cancer treatment since 2014.

The innovative executive took over Hasbro and transformed it from a toy and game manufacturer into a multimedia enterprise dabbling into television, movies, digital gaming, and more.

Goldner’s strategy saw Hasbro taking over Entertainment One Ltd. in 2019, the British entertainment company responsible for the “Peppa Pig” and “PJ Masks” shows, as well as other productions for young kids.

Toy consultant Marc Rosenberg worked shoulder to shoulder with Goldner as a marketing executive at Hasbro more than a decade ago and said the late executive was always interested in toy storytelling, drawing inspiration from archives to come up with brands as My Little Pony, Transformers, and the Littlest Pet Shop.

Rosenberg said: “His idea was to take brands that had been sitting dormant and reimagine them. He always said you have to have a story arc, whether it is toys or movies.”

Rich Stoddart, who had been the lead independent director of the company’s board, was appointed Hasbro’s interim CEO when Goldner took his medical leave.

Serving on the company’s board since 2014, Stoddart’s curriculum includes the CEO role at marketing company InnerWorkings Inc. and Leo Burnett Worldwide.

Regarding Goldner’s role as board member at ViacomCBS –CBS Corporation Common Stock (NASDAQ: VIAC)– Shari Redstone, non-executive chair of the company, told Reuters: “(Goldner's) guidance and leadership played a key role not only in the combination of Viacom and CBS but in the execution of the vision that has significantly shaped the company.”