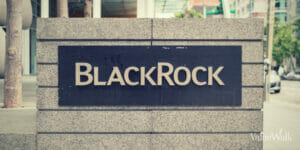 Following the trading day on Wednesday, a form 4 was filed with the SEC which revealed that BlackRock Inc (NYSE:BLK)’s Founder, Chairman and CEO Larry Fink sold almost 10% of his shares in the company.

According to the filing, Fink sold a total of 40,960 shares across four transactions which occurred on Tuesday the 22nd of November. The average price per share sold was $732.25 with a total transaction value of ~$30 million.

The sale of shares equated to around ~7.5% of Fink’s total position with the Founder retaining ~507 thousand shares following the transaction.

These latest trades are the second tranche of sales in the month according to Fintel’s insider analysis of BLK.

The platform highlighted that Fink sold just under ~11 thousand shares around the $685 mark on the 8th of November, bringing the total above 50,000 for the month.

Other inside sales included Chief Client Officer, Mark McCombe who sold 1,000 shares during the month.

Head of International and Corporate Strategy Mark Wiedman was on the list with around ~2,000 shares sold over November.

In total 5 net insiders have sold stock in the past 90 days, giving BlackRock a weak insider sentiment score of 35.77.

The latest trade by Fink and others comes after BlackRock's most recent share price strength which has seen BLK’s stock price rally more than 38% from a low point reached around the 11th of October of around $530.

Before this rally, BlackRock’s stock was down just over -40% over 2022, underperforming the S&P 500 and broader equity markets.

Investors may ask the question of why Fink and other insiders decided to sell stock when BlackRock continues to perform with great strength?

At the company's most recent result last month, BLK reported third quarter results to investors with Assets under management declining -16% over the year to $7.96 trillion  from $9.46 trillion in the prior year.

As a result of the declining asset values, BlackRock's revenue declined -15% to $4.31 billion as the investment provider derives the majority of its sales from ongoing management fees tied to asset valuations. Despite this decline, BLK’s revenue figure came in ahead of consensus forecasts of around $4.20 billion.

Despite volatile and weakening equity markets, BlackRock still attracted positive net flows of $65 billion for the quarter and $248 billion for the year. The company told investors that most of the inflows were driven by continued momentum in strategic ETFs and significant outsourcing mandates. Fink in the management commentary called these “industry-leading long-term net inflows”...

The street remains generally positive on BLK with a consensus ‘overweight’ rating. The average target price is around $650 which is below the share price following the recent rally.

Despite market forecasts, the investment manager's share price will likely be correlated highly with equity market performance which is expected to remain volatile over the next few months.