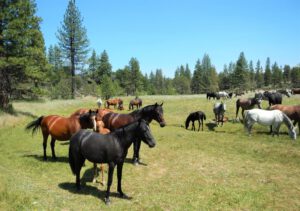 Are Some Wild Horse Non-Profit Advocates Violating the Intent of the 1971 Free Roaming Wild Burro and Horse Protection Act?

Let’s start by examining some facts, instead of the misleading agenda-driven narratives that are promoted by some non-profit activists who condone what are arguably violations of at least the intent of the very Act created to protect wild horses and burros.

The Preamble to the 1971 Free Roaming Wild Burro and Horse Protection Act assigns the intention of the Act by the will of the American people through Congress.

“Congress finds and declares that wild free-roaming horses and burros are living symbols of the historic and pioneer spirit of the West; that they contribute to the diversity of life forms within the Nation and enrich the lives of the American people; and that these horses and burros are fast disappearing from the American scene. It is the policy of Congress that wild free-roaming horses and burros shall be protected from capture, branding, harassment, or death; and to accomplish this they are to be considered in the area where presently found, as an integral part of the natural system of the public lands.”

The intent of the 1971 Act is paramount and timeless

As outlined in its Preamble, the intent was not to have herds of wild horses and burros artificially managed as if they are livestock.

Arguably, the most important intentions of the Act were stated with these words in the Preamble:

“It is the policy of Congress that wild free-roaming horses and burros shall be protected from capture, branding, harassment, or death”, as well as; "as an integral part of the natural system of the public lands."

Wild horses being harassed by misguided activists and advocates:

Wild horse activist-advocates disturbing and chasing horses around the landscape with high-powered compressed-gas firearms, and shooting them with heavy darts filled with chemicals, is technically 'harassing' American wild horses!

Non-profit wild horse activist-advocates who condone or support the policy of chasing wild horses around the landscape and shooting them with chemical contraceptive darts weighing 500-grains or more, are indirectly culpable in this harassment!

Comparing the projectile weight of an average contraceptive dart to that of the world’s most powerful handgun, the Smith & Wesson .500 magnum; the S&W .500 magnum shoots projectiles (bullets) weighing from 265-grains up to a 700-grain projectile.

"Even on a large animal struck correctly, the dart (contraceptive PZP and GonaCon darts) can cause hemorrhage and hematoma. Misplaced shots can break bones or even kill the animal” (Thomas and Marburger 1964).

“Report--Muzzle report can cause problems in darting either captive or free-ranging animals. In captive situations, the noise can be more disturbing to animals than getting struck with a dart.”

“Disturbed animals are then more difficult to approach, or the entire group of animals may run away". (Page 32; Overview of Delivery Systems for the Administration of Contraceptive to Wildlife”, by Terry J. Kreeger

The use of any conceptive chemicals on wild horses is in fact a form of ‘selective breeding’. Horses that are treated, cannot have foals, while the untreated do have foals. And the person pulling the trigger decides which mares (and genes) are selected.

The act of choosing which animals get to breed and which do not, is a form of ‘selective breeding’, and that is part of domestication. And in some cases, the decision is based upon a horses’ appearance in the eyes of a person engaged in darting, or which horse is a convenient target. And even with a genetic analysis of the target horse(s), it is still; a form of selective breeding.

The use of the contraceptive chemicals known as ‘PZP’ and ‘GonaCon’ have a seriously adverse effect on the gene-lines of native species American wild horses.

So, keeping (managing) wild equids comingled with livestock in herd areas where their co-evolved predators have been depleted or are missing, is doing wild equids an ecological and genetic disservice and is actually mismanaging them.

It’s a fact that chemical contraceptives (PZP and GonaCon) cause genetic erosion over time, and social disturbances in family bands, as well as other adverse effects (aborted foals, etc.).  Dr. Cassandra Nunez PhD has many published studies outlining these issues, here: https://www.nrem.iastate.edu/people/cassandra-m-nu%C3%B1ez

Condoning, supporting or standing silent about such questionable conduct against wild horses, even as a so-called interim solution to arbitrarily and artificially reduce wild horse populations, is engaging in willful ignorance and harming wild horses and ecosystems.

Wild horses and burros must be ‘wild and free’ and living naturally in a ‘natural system’ on public lands.

There is a proven, natural method for saving America’s wild horses.

Wild Horse Fire Brigade is economically and ecologically appropriate (cash-positive for taxpayers), instead of the $-Billion dollar drain over the next ten years that is proposed by the Biden administration and supported by Department of Interior Secretary Deb Haaland.

Biden’s current plan (the legacy plan from President Trump’s administration), continues the abuses of wild horses and insults the intent of the 1971 Act. Their plan is also laden with potential for ongoing headaches and litigation for all stakeholders.

William E. Simpson II is a naturalist/rancher living among and studying native species American wild horses. Simpson is a recognized expert on wild horse behavioral ecology and their management by numerous county and federal officials. Mr. Simpson is the author of two published books and more than 100 published articles on subjects related to wild horses, wildlife, wildfire, and public land (forest) management. He has appeared on NBC NEWS, ABC NEWS, theDoveTV and has been a guest on numerous talk radio shows including the Lars Larson Show, the Bill Meyer Show, and on NPR Jefferson Public Radio.