The Metail Economy: From Main Street To Superstore 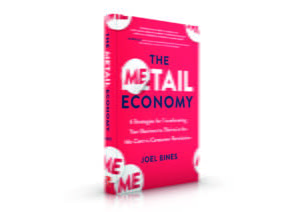 “Excerpt from The Metail Economy: 6 Strategies for Transforming Your Business to Thrive in the Me-Centric Consumer Revolution by Joel Bines, pp. 6-8 (McGraw Hill, January 2022).”

From Main Street To Superstore

“Mom-and-pops” at first proliferated throughout the United States in the form of pharmacies and general stores selling every- thing from toys to farm equipment, liniments, fabric for making dresses, and whatever else settlers needed for their daily lives. This collection of retailers on the side streets, as well as general stores on Main Street, gave way first to mail-order and catalog shopping and then to the suburban mall in the mid-1950s, when architect Viktor David Grunbaum built the first enclosed shopping center in North America. Again, it was nothing particularly new. He was trying to re-create the kind of communal gathering space—with shopping, art, and entertainment—that existed back home in the European market square.

These locations quickly became a commercial oasis in the cultural desert of the American suburb, the place to go on weekends to see a movie, eat in the food court, or browse Strawberry’s or Waldenbooks. For a period of time, the mall became the center of the universe in terms of consumer culture, and in 1986, it was even selected as one of the Top 50 Wonders that revolutionized the lives of consumers. Yet in spite of the “this-changes-everything” new-retailmodel hysteria, all this changing of locations and store type still did nothing to change the dynamic between the customer and the store. You bought whatever was on offer, or nothing at all.

Next came the big-box stores, where efficiency and well- stocked shelves trumped the personal touch of neighborhood stores. In 1962, Walmart Inc (NYSE:WMT) started this revolution in store format when it opened its first location in Rogers, Arkansas. As much as people enjoyed the mall walk, many consumers preferred the one- stop shop, where they could find what they needed, typically for less than on Main Street.

So, from one perspective, it has been one disruption after another but, in spite of that, never an actual revolution. Whether you were circling your local mall’s giant lot, vying for a coveted parking space near one of the anchor stores like Filene’s or JCPenney, or driving to the nearest big city to do some retail therapy on a Miracle Mile or Fifth Avenue, you still had to come to the retailer to buy whatever wares it had chosen to make available for you.

Some of these store models were more pleasurable or convenient or both. Some were none of the above. If you’re old enough, maybe you remember a time when, for example, if you lived in a small town like Buck Creek, Indiana, and you needed a snow- blower, you had to drive to the nearest Sears or Toro dealer 40 miles away, braving whiteouts on the freeway, because it was the only place you could get one, and you had at best a choice of three, maybe four models. The point is that the companies selling to consumers owned the power in the relationship. Anyone old enough to remember some of the retailers mentioned on these pages must surely remember feeling, “I really wish I didn’t have to buy this thing from this place, but I don’t have a choice.”

This power dynamic has been the one constant through line of buyer-seller iterations for millennia. Humans bought or traded for items they desired from other humans who had them, with the consumer meeting the retailers where they were, not the other way around. It was the companies that determined what was available when, to whom, and for how much. They called the shots.

Except, as you may have noticed - and I’m talking pre- pandemic - some of the biggest retail names in the global consumer market have been struggling to stay in business. The pandemic accelerated the trend, but the cull has been a long time coming. This is despite companies scrambling to increase their online presence, providing an endless array of other services, chatbots, personalization, and whatever other offering they can think of to keep up with the Jones.comses. But how can this be? If it’s just about adding new models or digital investments, then why are so many retail, restaurant, and other consumer-facing businesses struggling to survive? Put simply, it is because businesses have largely missed the point.

Consumer expectations began to evolve in the early-to-mid- 1990s, when eBay, Amazon, and other pioneers launched the first wave of digital retail. But too many consumer companies are operating under the false assumption that the difference was the ability to buy goods and services online. This is not the point. The key change arose through the power of information, with consumers using technology as research and connection tools before making their purchasing decisions.

With ever more information becoming available, and with the concomitant power to disseminate their own thoughts and feelings to one another, consumers outgrew and rejected the age-old company-customer relationship and began behaving in ways companies still can’t quite comprehend. Around 2010, the winds of change could already be felt in erratic demand and ineffective marketing campaigns, but even as the digital space became less chaotic and more sophisticated, companies failed to recognize that the consumer had taken control, and this failure to see the power shift continues to this day.