The Ethereum Merge Is Here: The Most Important Crypto Event Since Bitcoin’s Launch? 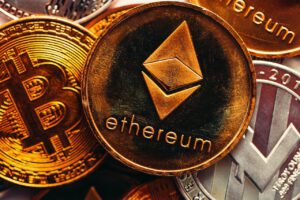 The Ethereum Merge is a “landmark, historic moment” for the entire cryptocurrency market that will be a “major catalyst” driving prices higher in the long term, predicts the CEO of one of the world’s largest independent financial advisory, asset management and fintech organizations.

The bullish prediction from deVere Group’s Nigel Green comes as the long-awaited so-called Merge of the world’s second-largest crypto, Ethereum, has just happened.

The Merge is a major overhaul and switch over to a new operating model that will use 99.9% less energy and will reduce supply of the crypto.

He says: “The years-in-the-making Merge, a network-wide, grand scale upgrade is here.

“This is far-reaching overhaul of the most commercially important blockchain in the digital asset ecosystem is probably the most important, landmark event in crypto history, since the launch of Bitcoin.

“It transforms Ethereum from a proof-of-work to a proof-of-stake mechanism, which lowers transaction costs, enables the network to process more transactions in a shorter amount of time, and will slash energy consumption by a massive 99%.”

The deVere CEO and high-profile cryptocurrency advocate predicts that the “historic occurrence” will fuel prices across the market.

“Whilst some of the news has been priced-in already, let there be no mistake: this event will be a major catalyst driving prices higher in the long term,” he affirms.

“The slashing of energy consumption will be the main reason as it will become significantly more appealing to institutional investors, who bring with them enormous capital, expertise and reputational pull.

“Those institutional investors who have been sitting on the sidelines are now likely to move in.”

He goes on to add: “Besides having a more positive climate impact, The Merge’s effect of reducing supply, cutting costs and speeding up transactions will also appeal to both individuals and institutions.

“Due to the significance of The Merge, we expect the developments to bolster prices across the wider crypto market to some degree.”

Nigel Green has for many years spoken about the potential of Ethereum. He has previously spoken in the media about it “being more useful than Bitcoin and having tech advantages over its better-known rival.”

He concludes: “The Merge represents a major boost not just for Ethereum but for blockchain technology itself.

“This is a momentous day for crypto.”

deVere Group is one of the world’s largest independent advisors of specialist global financial solutions to international, local mass affluent, and high-net-worth clients. It has a network of more than 70 offices across the world, over 80,000 clients and $12bn under advisement.