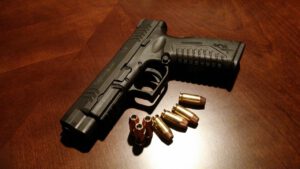 Students Demand GWU Adopt Precautions Against School Shootings; We Are Genuinely Afraid To Lose Our Lives To Acts of Gun Violence – Editorial

WASHINGTON, D.C. (November 22, 2022) – In an editorial entitled “After the Tragic Shooting at UVA, Where Do We Go From Here?, students leaders told George Washington University [GWU] administrators that “We are genuinely afraid to lose our lives and the people we love to similar acts of gun violence on GW’s campus.”

After reminding GWU administrators that "since [Sandy Hook], there have been 948 school shootings in the United States," and that "for as long as the members of this editorial board have been alive.

School shootings have cast a shadow over our education," they plead that "GWU . . . may not be able to stop shootings before they start, but there are steps it can and should take to limit the harm they can create."

Fortunately, there is a new study published in University World News which - based upon lessons learned in earlier shootings, including in Uvalde Texas - outlines for universities almost a dozen simple, very inexpensive, and proven steps they can and should take to deal with the now-all-too-foreseeable threat of an active shooter on campus.

These include, for example, providing administrators with master keys to all classrooms, having a breaching tool to be able to enter classrooms though locked or jammed doors, providing clear signage for first responders, text messaging programs for students who are hiding and/or injured, etc.

The irony is that, although the study was prepared by a member of GWU's own tenured faculty who had served as both a security officer and as a security consultant, GWU administrators have to date refused to adopt all but one of his security recommendations, and even this one - involving locks - was implemented only after many years of delay and enormous pressure from students.

More specifically, the SANDY HOOK ADVISORY COMMISSION recommended early in 2015 - as had other expert bodies - that all classrooms "should be equipped with locked doors that can be locked from the inside” so that teachers would not have to risk stepping out into the hall during an active shooter emergency to lock the door.

Yet it took until late in 2021 for GWU to equip most - but still not yet all - of its classrooms with locking mechanisms, even thought a simple locking latch cost only $15 and could be installed in only 10 minutes.

And this occurred only after unanimous recommendations and pleas by GWU's student government body, and its Law School Bar Association, says public interest law professor John Banzhaf, who led the fight for this and other simple safety improvements.

At this point administrators have refused to even discuss taking additional precautions against a campus shooter - including the recommendations in the report - says Banzhaf.

Noting that, in the past, GWU had initially resisted taking other steps to help improve safety on the campus, and then reluctantly relented only after unreasonable similar delays. He cites the following as a few examples:

It was only after a law school staff member was seriously injured in a sexual assault in an underground GWU garage on Oct 11, 2021 that GWU adopted, but only by July, 2022, Banzhaf's suggestion that there should not be unlocked and unguarded doors (in additional to two elevators) leading from the street into the garage and its stairways.

Especially since GWU admitted that it was aware that vagrants - including those with drug and alcohol problems - frequently entered the garage though these unlocked doors and remained hidden in the stairways.

But GWU has so far refused to implement another simple and logical suggestion to help prevent rapes and other crimes in its garages; have so-called "alarm buttons" already in its garages actually sound an audible alarm when pushed (to help scare off a perpetrators and/or alert other garage patrons to come help).

And also equip them with microphones (so that patrons can explain the nature of the emergency, provide a description of the suspect(s), etc.)

Another suggestion, following the tragedy in 2017 on the campus of the University of Virginia in Charlottesville - that GWU should amend its rules related to campus marches and demonstrations to prohibit the carrying of flaming torches and other dangerous weapons.

As well as the wearing of masks to prevent identification of any perpetrators - was originally rebuffed, although it would have cost GWU nothing. When, years later, the rules were finally adopted, it was done without any notice to potential rioters.

When a professor was recently shot and killed by a student, Banzhaf reminded administrators that the "professor might be alive today if the University of Arizona had spent less than $5 to install a peephole – of the type used at even the cheapest motels – in his office door. . . .

If a peephole had been installed, Professor Thomas Meixner probably would have recognized the shooter from his picture which had been circulated to staff at UA - and/or seen the gun - and not opened the office door; thereby saving his life." Since then, Banzhaf's plea for peepholes in office doors has gone unanswered, much less unimplemented.

To date, GWU professors do not have this elementary and inexpensive form of protection, even if they must work in their offices late at night and/or on weekends, when the risk of an irate gunman would be highest, and when many professors would not have an open-door policy.

In the event of an active shooter alert on campus, cautious professors would not want to unlock their office doors if they cannot see if the person knocking is a police office or someone with a gun, notes Banzhaf.

Because AR-15 and similar rifles, seemingly the weapons of choice of many school shooters, tend to cause massive wounds so victims tend to bleed out and die in only minutes before outside aid can arrive.

Many schools have adopted the suggestions of experts and installed Stop-The-Bleed kits which permit bystanders to stop bleeding until help arrives - similar to AEDs [Automated External Defibrillators] mounted on walls which allow bystanders to deal with heart attacks until medics arrive.

The students themselves, as well as Prof Banzhaf, have recommended that GWU acquire such kits to save students from bleeding out before help arrives. At the moment, the University of Maryland in Baltimore has some 250 Stop-The-Bleed kits, one mounted on the wall under each AED. It appears that GWU has zero, says Banzhaf.

Failing to take some simple steps - which GWU's students point out "it can and should take to limit the harm they can create," as well as limit what would otherwise be massive legal liability if some deaths or injuries could easily have been prevented - is penny wise and pound foolish under these circumstances.

And it should not take GWU administrators months, much less years, to at least begin to give these simple and inexpensive steps some serious consideration, argues Banzhaf.