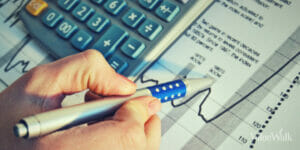 Irrational exuberance is nasty stuff. It appears when investors crave more in the way of stock gains than increases in economic productivity alone can generate. What makes irrational exuberance so difficult to combat is that the negative consequences that follow from it can be delayed for a long time.

For so long as there are no visible negative consequences, investors experience only pretend gains that they believe to be real. So they make no effort to bring an end to the bull market generating the irrational exuberance and permit it to grow stronger and stronger.

Eventually, of course, there are severe negative consequences. The market’s core job is to get prices right (this is the core job of all markets). When the market is not able to pull prices down through any other means for a long time, it crashes them.

The huge loss in consumer buying power causes an economic contraction that causes hundreds of thousands of businesses to go under and millions of workers to lose their jobs and political frictions to escalate. If only we could pop bubbles before they got so out of hand!

In theory, we could. Shiller’s Nobel-prize-winning research showing that valuations affect long-term returns is the answer. If stock investors were warned on a daily basis of the dangers of Buy-and-Hold strategies (strategies that do not call for market timing in response to high valuation levels), market prices would be self-regulating – high stock prices would cause investors to lower their stock allocation and the stock sales would bring prices back to reasonable levels. We are obviously not in that magical place today; today’s CAPE value tells us that much.

I’m always trying to think of ways to make clear to investors how dangerous it is to fail to engage in market timing.

So long as investors practice price discipline when buying stocks, the market could continue functioning forever without there being another price crash or another economic crisis. But in a world in which Buy-and-Hold strategies are heavily promoted (the world we live in), prices go up and up and hardly anyone even frets about it.

Until the crash and the economic crisis arrive. It doesn’t do much good to fret then because at that point the damage has been done both to millions of individual retirement plans and to our economic and political systems as a whole.

So it would be useful if we could come up with a metric that made it clear in a simple way how much damage is being done each time investors are advised “there’s no real need to engage in market timing” or something along those lines. It is the individual acts of promotion of Buy-and-Hold strategies that do the damage but all that investors personally witness are the crashes and economic crises that the Buy-and-Holders blame on negative economic developments.

Every time someone gives voice to the idea that market timing (exercising price discipline when buying stocks) is not necessary, $10,000 of wealth is destroyed.

There is no scientific basis for that claim. I made the number up. My aim here is just to give an example of the type of statement that we all need to hear more often. If people were reminded regularly that discouraging market timing / price discipline comes with such a big price-tag attached, we would hear market timing discouraged a lot less frequently.

In January 2000, when we hit the peak of the bull market, the CAPE value hit “44.” That translated into $12 trillion of excess market value. Say that market timing was discouraged once every day for 10 years. That would be 3,650 statements discouraging market timing. If each of those statements caused a loss of #10,000 in wealth, the total lost wealth would be 36,500,000.

Statements that discourage market timing / price discipline are extremely costly to all of us. We just do not realize how costly because it can take 10 years or even a bit longer for that cost to be brought home to us in the form of a price crash and an economic crisis.