Should Trigger Warnings Be Attached to Discussions of Irrational Exuberance? 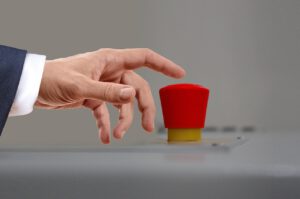 I was watching the Netflix series “The Crown” the other day and the episode that I was watching began with a trigger warning — the episode showed Princess Di struggling with her bulimia problem. The thought struck me that perhaps one way to get articles describing what the last 40 years of peer-reviewed research teaches us all about how stock investing works posted on the internet is to attach trigger warnings to them.

The people who put together the Crown episode believed that Princess Di’s bulimia was an important part of the story they were trying to tell. And they probably believed that ignoring the bulimia problem will not solve it. So they elected to portray the problem while being sensitive about it and while warning those who just cannot bear to watch even a sensitive portrayal that they might want to elect not to view it. We need to do something along these lines in the investment advice realm.

People who have followed Buy-and-Hold strategies feel genuine angst when the peer-reviewed research is discussed. We need to be sensitive to their concerns. But we also very much need to discuss what the research shows. There wouldn’t be so many Buy-and-Holders had we been talking frankly about these matters going back to 1981. Continuing to ignore Shiller’s research is just not a viable option. We need to find a way to be both sensitive and frank.

I praise the Buy-and-Holders to the sky all the time. I have never felt any hesitancy in doing that because it is something that I can do with total sincerity. I think this is part of the answer. Noting the good that the Buy-and-Holders have done puts those who have followed the strategy a bit at ease.

But it is not the entire answer. There are some respects in which we must be tough on Buy-and-Hold. I have often referred to “the smelly Buy-and-Hold garbage.” That’s not a diplomatic turn of phrase. I say it that way because on occasion it needs to be said that way. Do you think that we could have ever gotten warning messages placed on packages of cigarettes if we noted diplomatically that there might be a time when smoking would make a person feel a bit under the weather? Lung cancer is an ugly reality and smoking causes it. Some harsh language was required. A failed retirement is a serious life setback. Some harsh language is required in this case too.

I offered on several occasions to have language added to my posts pointing out that I do not possess the creddentals that would in ordinary circumstances qualify me as an expert on the subject of stock investing and that I believed that anyone who followed my investment advice solely because I put it forward was a darn fool. Such language would soften my message a bit. But not enough for most people to feel entirely comfortable with it.

But we must talk about them. No one wakes up in the morning thinking: “Today I will dedicate myself to the task of destroying my hopes for a safe retirement.” We all need to know about the how-to implications of Shiller’s research. And there is simply no way to say what is so without making the Buy-and-Holders look bad. Shiller’s research shows that timing always works and is always 100 percent required. The Buy-and-Holder have been claiming for many years now that market timing never works. It’s not possible to reconcile those two positions.

The Get Rich Quick Urge

Buy-and-Holders won’t like hearing that they are the equivalent of bulimics. But of course bulimics don’t like hearing that they are bulimics. The fact that they don’t like coming to terms with the matter is a big part of their problem. Because the Get Rich Quick urge is subterranean. Permit it to be exposed to sunlight and it goes away. The market becomes self-regulating once widespread discussion of what the research says is permitted.

We already possess the knowledge we need to become more effective investors. The next step is to work up the courage to delve into it. If adding a trigger warning to the message helps get it out there, that’s a small price to pay.

The post Should Trigger Warnings Be Attached to Discussions of Irrational Exuberance? appeared first on ValueWalk.