Vancouver, B.C., October 14, 2020. PORTOFINO RESOURCES INC. (POR: TSX-V) (POTA: FSE) (“Portofino” or the “Company”) is pleased to announce it has received the final deliverable maps for the high-resolution airborne magnetic survey covering the Company’s South of Otter Project in the Red Lake gold camp, Ontario (the “Project” or “Property”). The survey has identified several structural and magnetic features that when merged with recent trenching, sampling and surface mapping, as well as historical work have enabled the Portofino technical team to prioritize targets for follow-on sampling and an initial stage drilling program.

Several magnetic features have been outlined by the airborne survey that merit follow-up exploration. Of primary interest is the continuous band or belt of highly magnetic responses shown as bright orange to red to purple lineations (Figure 1). These responses trace an interpreted axis of a major east-west regional fold that curves across the northern half of the claim block, a distance of approximately 9.7 kilometres (‘km”) and could reflect bedrock enriched in magnetic minerals such as pyrrhotite and magnetite. The Company believes that this sort of magnetic response may be indicative of banded iron formation, often a significant host for gold deposits.

In the north central part of the Property, the magnetic bands are bent about and disrupted by an intriguing magnetic low anomaly that our team identified in our 2020 mapping, sampling and trenching programs as felsic intrusive units. As reported on August 26, 2020, the Company discovered a previously unidentified sulfide outcropping area (now referred to as the Cliff zone) and recovered grab samples assaying from nil to 16.0 grams per tonne (“g/t”) gold. Based on the high-grade gold grab samples and mapping, Portofino has developed a primary target area for a follow-up diamond drilling program. (Grab samples are selective by nature and may not to be representative of average grades.)

A second area of interest measures approximately 3.5km by 1.5km and is located within the northeast arm of the claim group where limited historical exploration work has been recorded. The magnetic bands of the second target area appear to “horsetail” reflecting a complex of highly folded host rocks. Portofino intends to conduct a full program of prospecting, mapping and sampling with follow-up trenching in this target zone. Portofino’s exploration crew completed trenches on several prospective sites including the Cliff Zone and successfully intersected several lithological contacts and mineralized units. The Company will aim to replicate the success of the previous trenching campaign and to look below the glacial cover for potential mineralized zones and additional targets.

The South of Otter Property is of sufficient size to be of regional significance. It comprises 16 mining claims containing 252 contiguous cell units and covers approximately 5,363 hectares (13,252 acres). In addition to the two primary targets, the Property hosts several tertiary magnetic features as identified by the airborne survey. Portofino is compiling all of the historical exploration data and will prioritize these tertiary features for follow-up exploration efforts.

Portofino’s CEO, David Tafel comments; “The high-resolution airborne magnetic survey is proving to be an effective tool in advancing our properties. Like our Gold Creek Project, the South of Otter claims cover a huge area of highly prospective gold targets. The airborne survey is enabling us to select drill and follow-up targets in a time-effective manner. As previously announced, a drilling permit has been granted and we intend to commence a drilling campaign this fall.”

Drilling will be initially testing the highly prospective north central part of the Property where the airborne survey indicates a break in the major magnetic lineaments about a felsic intrusive plug. Summer 2020 trenching by Portofino in the north central target area, discovered gold mineralization associated with the contact between the felsic units and volcanic rocks and extended by about 600m the potential of the Cliff Zone where surface grab samples assayed up to 16.0 g/t gold. Drill sites will be selected to intersect extensions of the high-grade Cliff Zone and the other target anomalies. Once the particulars of the program are finalized, the Company will announce the starting date, total meterage and planned number of holes.

About the South of Otter Property

The 5,363 hectares Property is contained within the Birch-Uchi-Confederation Lakes greenstone belt which hosts the world-renowned Red Lake gold deposits and includes the outstanding Dixie project currently being drilled by Great Bear Resources Ltd. (“GBR”). GBR has reported over the past 2 years exciting and company-building drill results with mineralized intersections commonly returning bonanza gold grades in association with coarse visible gold grains. Portofino’s South of Otter Property is situated approximately 8 km east of GBR’s claims. In addition, GBR recently announced (September 9, 2020) the discovery another significant gold target called the “Sobel”, located about 10km northeast of and in the same greenstone belt as Portofino’s South of Otter Property. 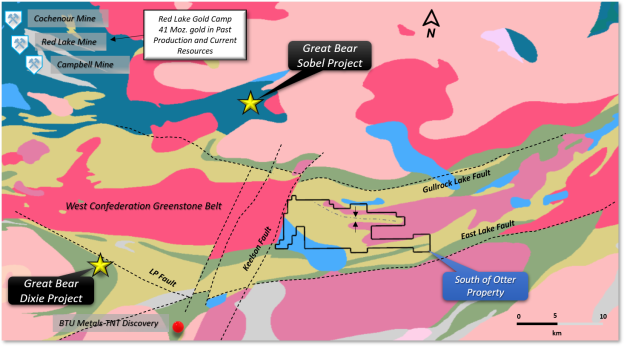 The technical content of this news release has been reviewed and approved by Mr. Mike Kilbourne, P.Geo., who is a Qualified Person as defined by National Instrument 43-101, Standards of Disclosure for Mineral Projects.

Portofino is a Vancouver-based Canadian company focused on exploring and developing mineral resource projects in the Americas. Its South of Otter and Bruce Lake projects are in the historic gold mining district of Red Lake, Ontario proximal to the high-grade Dixie gold project owned by Great Bear Resources Ltd. In addition, Portofino holds three other northwestern Ontario gold projects; the Gold Creek property located immediately south of the historic Shebandowan Nickel-Copper mine, as well as the Sapawe West and Melema West properties located in the rapidly developing Atikokan gold mining camp. The Company also maintains a 100% interest in the Yergo lithium salar property located within the world-renowned “Lithium Triangle” in Argentina. For further information on the Company, its projects and its management please visit our website: https://www.portofinoresources.com/.

ON BEHALF OF THE BOARD

This news release may contain forward looking statements concerning future operations of Portofino Resources Inc. (the “Company”). All forward- looking statements concerning the Company’s future plans and operations, including management’s assessment of the Company’s project expectations or beliefs may be subject to certain assumptions, risks and uncertainties beyond the Company’s control. Investors are cautioned that any such statements are not guarantees of future performance and that actual performance and exploration and financial results may differ materially from any estimates or projections.