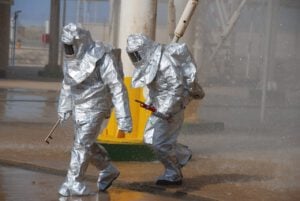 With the surge in Omicron cases across the country, many expect Congress to come up with another round of stimulus checks. So far, there isn’t any material development on this front. Some in Oregon, however, may get another stimulus check from the state government. This Oregon coronavirus stimulus check, if approved, will only be for the essential workers.

Oregon Democrats are working on reviving a proposal to offer essential workers who worked throughout the pandemic, a one-time payment of up to $1,000, according to Oregon Live. Specifically, workers in jobs that are classified as medium- to very high-risk occupations by the Occupational Safety and Health Administration would qualify for this one-time payment.

However, such workers must have worked an average of at least 20 hours per week from April to December 2020. Also, these workers must have earned less than $22 an hour or $42,900 per year, and must not have received any other bonus or hazard pay from the state for working during the pandemic.

In a House committee meeting Tuesday, Rep. Andrea Valderrama (D-Portland), who is co-sponsoring the proposal, noted that they have asked for information from the Oregon Employment Department on the number of workers who could qualify for the one-time payment. The initial estimate is that at least 230,000 workers could qualify for the Oregon coronavirus stimulus check.

“This bill solves that by providing a one-time appreciation payment to some of our lowest wage workers in the highest risk places,” Valderrama said.

Not a new proposal

This new proposal is a trimmed down version of a bill that Democratic lawmakers introduced last spring. The original bill would have given stimulus checks of up to $2,000 to essential workers, as well as a payment of $1,200 to unemployed Oregonians who returned to work in frontline jobs by last fall.

Republicans opposed the bill, arguing that giving more stimulus money to workers didn’t make sense as unemployed workers were already getting federal unemployment benefits of $300 a week. At the time, the lawmakers were unable to win approval for the legislation, but talked of picking it up again in 2022.

“Essential workers have been risking their lives every day during the pandemic,” House Speaker Tina Kotek said at the time. “That’s why my top priority for the remainder of Oregon’s share of federal American Rescue Plan dollars will be additional support for frontline workers in 2022.”

To give stimulus money to the essential workers, the state would use the funds it got from the American Rescue Plan and state general fund. The Oregon Worker Relief Fund would be responsible for distributing the money. Oregon got $2.6 billion in state government funding from the $1.9 trillion American Rescue Plan, which was approved in March 2021.