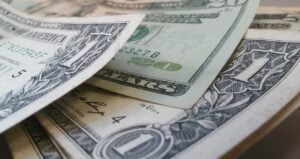 Over 3000 years ago the world’s first recognizable coins were produced in China. Flash forward to present times and we can see that the market size of China’s digital economy ranks second worldwide behind the United States– according to a white paper released by the China Academy of Information and Communications Technology. This explains why if you were to visit modern-day China you will most likely witness people paying using facial recognition on their smartphones.

Unsurprisingly, this is a common practice throughout the world, with the global shift to e-commerce– digital payment solutions are the way of the future. This radical shift in payment is projected to be just the start of this cash revolution.

Between digitalization and the environmental impacts, physical coins and paper money have seen a drop in demand. It would seem that cash is now no longer king. The change in our global payments ecosystem, which includes both physical cash as well as mobile wallets, can be attributed to the merging of three powerful industries: telecommunications, retail, and banking. This means that if we see a joint collaboration between the private and public sectors to utilize the latest technologies, we will realize the complete capabilities of a cashless society.

Whilst some countries are struggling to adapt to new technologies, others are well on their way to complete digitalization. In this article, we will explore the fundamentals of a cashless society and the countries that are pioneering this financial migration.

Are Cashless Societies The Future?

The future of finance has been forecasted to be “a digital paradise.” To live in a world in which all financial transactions are conducted via purely non-analog means – an absolute cashless society.

The Benefits of a Cashless Society

For those that are tech-savvy (at least to some degree) digital payment means simplicity and convenience. The ease of simply sending a P2P payment or tapping your phone significantly trumps having to stand in line at an ATM or worrying about if you have enough cash. Digital transactions also allow less room for error, since the exact amount can be paid without the need for change. The cost of cash manufacturing is expensive, with cash handling being even more so. The cut in cash production also has significant environmental advantages. According to the American Council of Science and Health, the mining and transportation of coins has led to the emission of more than 48,000 tonnes of carbon dioxide.

The World Economic Forum has reported that “cashless technologies could be some of our greatest assets in the fight against corruption and organized crime…Any sums appearing outside of that framework could immediately be flagged and investigated. This would narrow the focus for law enforcement and forensic accountants, making it easier to target and recoup hidden money.”

Which Countries Are Making The Switch?

The migration to a completely digital financial structure has shown heavy dependence on a country’s ability to keep up with and invent new technological advancements. This is why it should come as no surprise that the top contenders for cashless countries are also technological leaders in their own right.

Sweden, the Netherlands, China, the United Kingdom, and South Korea are some of the top countries that are rather close to achieving an almost cashless society. Sweden in fact is expected to reach this milestone as early as 2023. If we look at the British Pound vs Quid in Sweden, reports say that banks in the UK may be forced to keep cash for the elderly– following the Swedish model.

Christine Lagarde, president of the European Central Bank believes that the answer to this question is no, in an interview she said that “There are countries that are very close to cashless situations. If you look at countries like Sweden, and to a lesser extent the Netherlands, a lot of transactions are conducted without cash. But it's not necessarily to the advantage, to the benefit of all people. You have some senior citizens in particular who have zero interest in having digital currencies and who still want to operate with cash. That's fine, it should be available. People should have the option.”

Whilst a cashless society does seem to be the ideal option for convenience and security, its dependence weighs largely on a population’s access to the appropriate technology as well the ability to grasp the knowledge required to use it. This means that cash at this present time, holds a valuable place in most societies, but our dependency on physical currency is significantly decreasing.

If we look at how far we have come, the progress shows that a completely cashless global society is extremely probable, if not inevitable. However, for now, it seems that cash definitely has its place in our current society. But as countries become more technologically savvy the size of this space will decrease.