Buffett Indicator at All-Time Highs: A Cause for Concern? 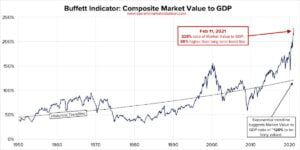 In 2001, Warren Buffett famously described the stock market capitalization-to-GDP ratio as “the best single measure of where valuations stand at any given moment.”

This ratio, now commonly known as the Buffett Indicator, compares the size of the stock market to that of the economy. A high ratio indicates an overvalued market—and as of February 11, 2021, the ratio has reached all-time highs, indicating that the U.S. stock market is currently strongly overvalued.

Today’s graphic by Current Market Valuation (CMV) provides an overview of how the Buffett Indicator has changed since 1950. We’ll also explain how the ratio is calculated, and why things might not be as dire as seem.

Before diving into the data, let’s cover the basics—what is the Buffett Indicator, and how is its value calculated?

The Buffett Indicator is a ratio used by investors to gauge whether the market is undervalued, fair valued, or overvalued. The ratio is measured by dividing the collective value of a country’s stock market by the nation’s GDP.

CMV used the Wilshire 5000 index, along with data from the Federal Reserve for the historical component, to measure the collective value of the U.S. stock market. Here’s a look at the nation’s composite market value since 1950: For the data on GDP since 1950, CMV dipped into the archives from the U.S. Government’s Bureau of Economic Analysis: 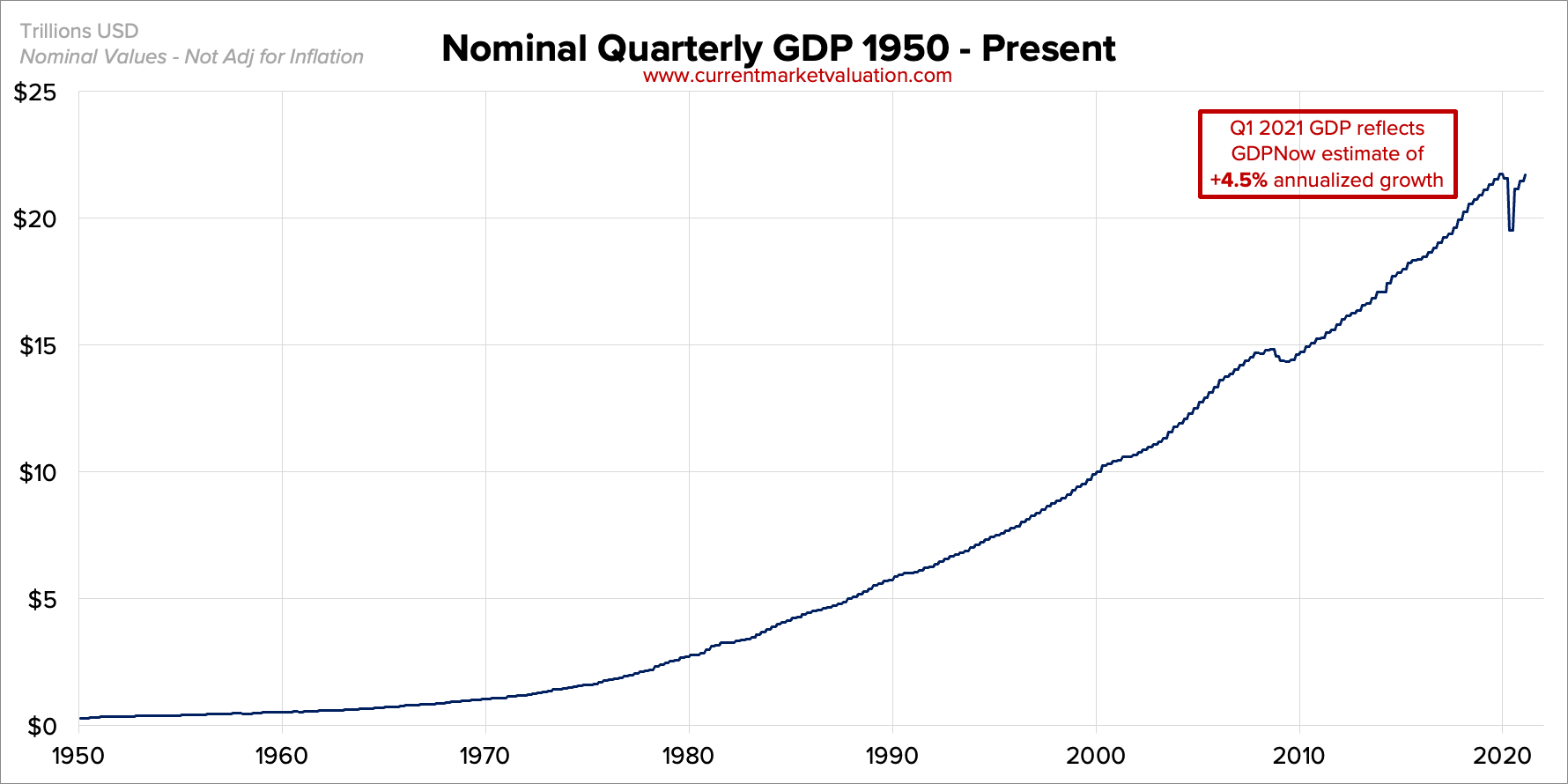 While the Bureau’s data is published quarterly, it doesn’t provide the latest figures. So to find Q1 2021 GDP, CMV used data from the Federal Reserve Bank of Atlanta, and came up with an annualized GDP of $21.7T.

According to Warren Buffett, “if the ratio approaches 200%…you are playing with fire.” And with the current U.S. ratio sitting at 228%—about 88% higher than historical averages, it certainly looks like things are heating up.

Will History Repeat Itself?

As the popular investing expression goes, the trend is your friend. And historically, the Buffett Indicator has predicted several of America’s most devastating economic downturns.

Here’s a look at some historical moments in the U.S. stock market, and where the Buffett Indicator was valued at the time:

As the table shows, the ratio spiked during the Dotcom Bubble, and was relatively high in the months leading up to the 2008 financial crisis. But does that mean we should take the ratio’s current spike as a warning for a market crash in the near future? According to some experts, we might not need to sound the alarms just yet.

Why are some investors so confident in the current market? One main factor is low interest rates, which are expected to stay low for the foreseeable future.

When interest rates are low, borrowing money becomes cheaper, and future real earnings are theoretically worth more, which can have a positive impact on the stock market. And low interest rates mean smaller returns for low-risk assets like bonds, which lowers investor demand and ultimately boosts stock prices further. Meaning that, as long as interest rates are at record lows, the Buffett Indicator will likely stay high.

However, history has been known to repeat itself. So, while we might not need to fasten our seatbelts just yet, this historically high ratio is certainly worth paying attention to.

The post Buffett Indicator at All-Time Highs: A Cause for Concern? appeared first on ValueWalk.